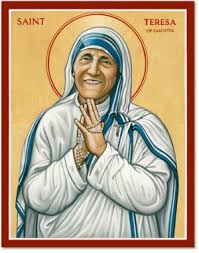 Much before Pope Francis infallibly declared Mother Teresa a saint, the world had already canonized her.  But they did not see Mother Teresa, they saw what they wanted to see.  Like a Rorschach test, they read onto the saint their own slanted ideas of society, the good and justice itself.  The world saw her heroic work but not the reason why she did it.  What resulted was seeing a cartoon Mother Teresa, not the real one; they admired half of Mother Teresa, not the whole saint.  They gazed at Mother Teresa through their unacknowledged prejudices, not through the lens of truth.  Seeing Mother Teresa as she really was would be intolerable to the Secularized West.  Call to mind the squirming of the members of the United Nations when she addressed them on Oct. 26th 1985.  She bravely declared to those assembled notables that the unborn are the poorest of the poor. It sounded to them like fingernails scratching a blackboard.  One recalls a similar reception that Aleksander Solzhenitsynreceived when he spoke to Harvard on June 8, 1978.  Those effete elites believed they would hear a Che Guevara stand-in going on an agitprop rant, in what Tom Wolfe dubbed “radical chic”.  Instead he passionately reproved the West for its decadence, while pointing out with dripping irony a school which still retained its motto “veritas”, while long finding its very alleged existence amusing.

While St. Mother Teresa walked in the same world that we do, her soul dwelt in entirely different one: the supernatural world. All she did was in obedience to the Divine command: “Whatsoever you do the least of my brethren, you do unto me.” No chorus of social justice here, only submission to the Divine Will.  She did not love the poor because they were poor, she loved the poor because she first loved Christ.  When man loves others on account of his own reasons, his love becomes a more noble form of mere self-love. In his City of God St. Augustine similarly indicts the ancient Roman Empire for this very reason, calling even their virtues, vices. Such human love is bound by the limits that man places upon it.

Saints love without limit, because their love is bound only by the limits of God, Whose love knows no limit.  Moreover, purely human love is fashioned according to the rules that man makes, which are as flawed as he is. Saints love with a perfect love, for its direction is always charted by God. Love of man that is not done out of love for God collapses into an epicene philanthropy, at best, or Marxist exertions, at worst.  St. Mother Teresa would have none of this, earning her the epithet of the prominent Indian physician, Dr. Araupe Chatterzu of “propagating a cult of suffering.”  Isn’t it just like the world to see suffering as some kind of Sartrean no-exit?  No wonder it must expel suffering through the ghoulish rationale of euthanasia.  Irony is stretched to its limits when this killing is called mercy.  Interesting how porous secularism has made mercy.  Tragic how some Catholics excitedly try to play catch-up with this secularist Brave New World.  Saints desire only to ease the pain of the suffering man in front of them, rather than organizing a rent-a-mob to protest that men are suffering.

Every act of this saint was first an act of the love of God.  St. Camillus de Lellis would kneel before the hospital bed of the suffering to whom he tended and called them, “my Christs.”  Such supernatural motivation unleashes heroic acts that shock the world, leaving its self-absorption under indictment.  Apart from the most callous secularist, the remark of Saint Mother Teresa that she would “take men who lived liked animals, and have them die like angels” causes earthquakes in the souls of men.  To liberal elites who only see “the poor” as a political category she was anathema.  She did not exhaust her life among the poor because they were hungry but because they were made in the image and likeness of God.  As her religious order flourished beneath the banner of this supernatural impulse, other religious Orders were withering under the metastasis of their secularity.

It was so easy to see.  Where St. Mother Teresa hands were wiping the sweat off the brow of a dying AIDS victim, more than a few Religious Orders had their hands raised in a clenched fist against patriarchy.  While the Saint held little babies in her hands, other Religious joined their hands with their pro-choice Sisterhood.  Many other Religious marched solemnly for the empowerment of the poor, all that St. Mother Teresa did was feed the poor.   When certain other Religious traveled to foreign lands to join Communists in the Struggle, the Saint struggled to please her Savior by quenching the thirst of a small child.  Some of those religious were called martyrs for dying for the People’s  cause; but anyone of the most basic common sense knew the true martyr was St. Mother Teresa, who gave her entire life for the poor for the love of God.

Most importantly, the Saint wanted always to be known and seen as a faithful Daughter of the Church.  Neither she nor any of the sisters in her Order were ever seen outside of their religious habit. Religious habit?  Why such emphasis on a mere incidental, at best, an outdated impediment, at worst?  Because it is not an incidental.  It is a sign integral to the mystery of consecration.  Man’s deepest truths beg for expression; they demand dramatic visibility lest they recede from proper attention.  Signs are humankind’s trumpets, and man’s most sublime verities mandate trumpet blasts.  Of sublime verities, consecration to God stands loftily above all others.  It deserves nothing less than the silverest trumpets: the habit, the cassock.

St. Mother Teresa’s nuns radiate a joy embedded in an absolute obedience to the Church.  The PC jargon of the world is alien to them as rap is to a Bach concert. They know only the eloquence of the teachings of Christ and His Holy Church.  Inscribed on their hearts is the saint’s famous dictum: “God does not want success, but fidelity.”   To the Saint, the world’s logic is a deafening din; the Church’s voice, operatic.