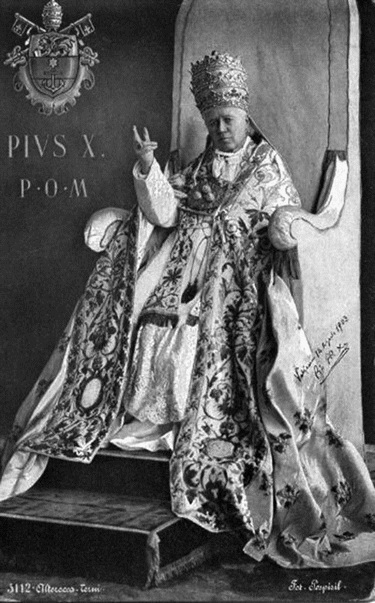 At the beginning of time a snake slithered into a Garden called Eden. He entered quietly and quite unobtrusively, as is his wont. And he wreaked havoc on the human race.

That same serpent slithered into the supernatural Garden of Eden, which is the Holy Catholic Church, in the waning years of the nineteenth century. Again, he did so unnoticed and blending quite naturally into the human landscape. This Ancient Serpent had oft-times crawled into the sacred precincts of Holy Church since that first entry. But this time it was different. Dramatically different. His havoc this time would strike a thousand blows to the Mystical Body of Christ. These were blows that cut more deeply than any in the two millennia that Christ’s Body trod the earth. Truth be told, those wounds have now been freshly reopened in a cruel twist of the serpent’s ingenuity.

Back in 1907, one man possessed the grace to spot the serpent. This man was a priest and a pope. More importantly, he was a saint. Giuseppe Melchiore Sarto was baptized on June 8, 1835, and was crowned Roman Pontiff as Pius X in August 1903 and died on the eve of World War I. Four decades later, Pope Pius XII raised Pope Pius X to the altars, the first pope to be canonized since Pope Pius V in 1712.

This saint named the serpent: Modernism. The title is easily misunderstood as a censure of all things contemporary, but it was chosen because this new heresy was a veritable cornucopia of philosophical and theological errors festering since the Enlightenment. He wasted no time in promulgating on September 8, 1907, a fierce and unambiguous condemnation in an encyclical, Pascendi Dominici Gregis (Tending the Flock of Our Lord). The encyclical’s title summarized the entire office of the Roman Pontiff, and indeed every successor of the Apostles: to feed, protect, and defend the “little ones,” like you and me. This saint understood, despite his meek and self-effacing manner, that Our Lord was summoning him to be a strong Father, by jealously guarding the depositum fidei which alone nurtures the souls of men. Papa Sarto recognized that the “little ones” would not be able to rise to the heights of Holy Charity if their souls were riddled with the toxins of heresy.

Pope Pius X understood that the easy religion Modernism proposed would tickle the ears of modern man like the sirens that seduced Odysseus’s soldiers. Modernism drained the life from Catholicism, leaving only an embalmed Church. Under cover of becoming more ‘friendly’ to the world, Modernism would wed the Church to the world leaving its Savior as only a noble historical footnote. The great pope would have none of this and set about purifying the Church. From Peter’s throne he hurled thunderbolts that shook the Church east to west, north to south.

The encyclical’s dense 87 pages exposed a heresy of startling depth, prompting the Pontiff to tag it “the synthesis of all heresies.” Where other errors in the Church’s history had threatened branches of the supernatural vine, Modernism attacked the trunk and root. Over and over, the Modernist partisans protested that an obscurantist Rome was once again impeding progress. A peasant pope lacked the sophistication to delicately parse anew a revised Gospel more congenial to men come of age. When the excommunicated Father Alfred Loisy (one of Modernism’s founders and most brilliant defenders) was approached at the end of his life for the Last Rites and rapprochement with the Church, he snapped: “Reconciled to the Church of Rome? To Pius X? A man more stupid and embarrassing than the Curé of Ars? No!”

Distilling the rich analysis of Pius X’s encyclical would be as much a miscarriage as recommending Cliff Notes for Hamlet. A few highlights must suffice: Modernism insisted that religion is simply a matter of a subjective movement of man’s élan, or, more idiomatically, a transaction of feelings. God was not “outside,” administered exclusively by a paternalistic Church; God was “within,” or, in Bergson’s phrase, God was man’s élan vital. This Modernist novelty earned one of Chesterton’s choicest quips: “The most horrible of all religions is the religion of the god within. When Mr. Jones says that he is talking to the god within, all that Mr. Jones is doing is talking to Mr. Jones.”

Modernism didn’t stop there. It held that the Church’s immemorial teachings had been mummified in a lifeless ahistorical irrelevancy, like a flea in amber. The Modernist prescribed “historical consciousness,” so that each doctrine is seen as only useful for the time in which it was written. Christ and his truth must evolve. Their meaning must depend upon the zeitgeist of each age. Finally, Modernism’s lodestar was its stress upon individual human experience. This was to become the gravamen of Revelation. A rebooted Christ was to be refashioned into the image of each individual man. No longer was man made in the image and likeness of God; God was remade in man’s. Or, in the words of that de rigueur theologian of the 1960s, John Robinson of Honest To God fame, “In order for Christ to be saved, Christianity must die.”

Truly, the “synthesis of all heresies.” Not just one aspect of the Faith was threatened, but the very Faith itself. Not just one aspect of God’s truth disappeared, but God himself. No wonder Pius X knew he must count no cost too great in addressing this malignancy. He mandated every one of his bishops around the globe to hunt down this heresy and crush it. The saint commanded that every priest solemnly proclaim an oath against Modernism as a prerequisite for reception of Holy Orders. That oath remained in effect till 1978, when it was thought to be an embarrassing fossil from a crouched and paranoid Catholic past, a relic of a Fortress Church. Today, echoes of Modernism resound in not a few parishes and university lecture halls. Its resuscitated apologists preach an open church that will make possible the easy dissemination of the old theological errors along with their newer variations.

During the Modernist crisis, Pope Pius X was approached by some cardinal advisers to reconsider his condemnation of the Modernist heresy. Shouldn’t he adopt a more conciliatory tone? Wouldn’t the Church be better served by fruitful dialogue? The humble yet Herculean pope famously retorted: “You want them to be treated with oil, soap and caresses. But they should be beaten with fists. In a duel, you don’t count or measure the blows, you strike as you can.” Isn’t this how we expect fathers to sound when his children are at risk? Especially Holy Fathers? Wouldn’t it be nice to think that Winston Churchill was inspired by that remonstrance of Pius X when, faced with advisers who pleaded negotiation with Hitler, he bellowed, “One does not reason with a tiger when one’s head is in his mouth!”

Someone, please tell me on this his feast day, where is Pius X today?